Mission Report
So a (literal) long weekend of trooping comes to an end with our attendance at Braehead on behalf of A1 Toys. To be honest even if this had been the best event ever it was probably still going to come as an anti-climax after the fun Lego Store events and coming on the heels of two 14-hour days in and around costumes even if there had been more to it than effectively manning a photo stand it would have been hard going to complete.
Mercifully though it was fairly short and being old hands at shopping centre events we were canny enough to ask to change in the access corridors behind the scenes as opposed to trying to get kitted up one at a time in the tiny (and bulging at the seams) stock room behind the shop.

Not that any of this was the fault of the staff who looked after us well enough, but it just seemed slightly un focused as an event, being positioned three-quarters of the centre away from the shop we were promoting (which itself seemed to only acknowledge the May 4th event by offering 50% off toy light sabres) and there not even being any flyers for the staff to hand out to promote their brand with our presence. None the less they seemed to indicate the shop had been busier than normal which was attributed to our presence, but it just wasn’t the type of event I’d have enjoyed even if I had been feeling up to it… 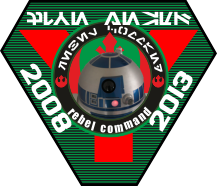 Mission Report
This was my second “silenced” troop of the weekend and the one that bothered me the most.  While I can laugh the astromechs laryngitis off, or make jokes about him constantly finding new ways to disappoint me with his behaviour at events, having him at a troop with his soundboard out of action was like he was only half there.  The droid can roll about, spin his dome with his lights flashing, but without any way for him to “communicate” with the public his presence is greatly diminished.

I felt it particularly when trying to interact with one particular little girl in a purple GAP sweatshirt that afternoon.  Several times she and her family came past where we stood and on each occasion she stopped to wave to the droid and converse with him, but beyond a shake of his dome he was entirely reticent.  Even when she moved off each time and he made to follow her, gloriously prompting and wagged finger and command to “stay”, the inability to command a well timed sad beep ruined the event for me.  Certainly if it wasn’t already the remote at fault for his failure to perform, it’s a cert that my frustrated, repeated and increasingly hard prodding at the buttons just to try to get a single squeak out at that point has surely busted it too.

Mission Report
There’s not much to say about this event, I only went along because Julie needed someone to assist with her costume and she was only attending to get her mandatory one troop for the next 12 months out-of-the-way.  The costumers were pretty much in the same spot all day, barring a few wanders up to the other end of the centre and back.  Still the discount they gave us in the shop led to an extortionate amount of Lego being purchased…